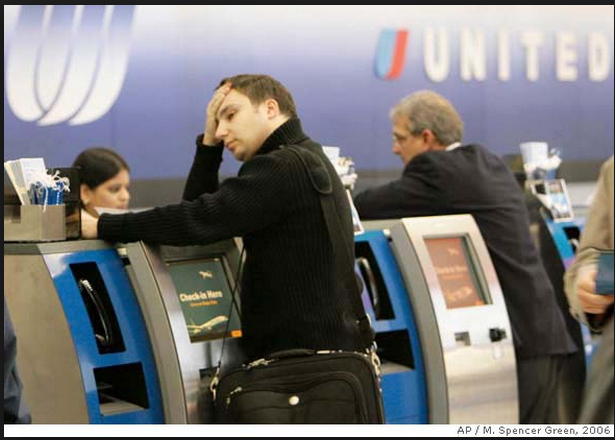 I’m sure most of us have not been fortunate enough to avoid terrible customer service of some sort at some point in our lives.

But just in case you were wondering what that might look like, read this story  about how United Airlines is perfect at terrible customer service.

Writing about my travels is usually not a topic for this blog. After reading this story I decided I would use this as a perfect example of how NOT to treat customers.

My flight coming back into the US was scheduled for 4:35.  At 4 PM we were informed that the flight was delayed until 5:15.  That means that I now would only have 25 minutes to catch my connecting flight… I had my fingers crossed that their time estimates were correct.  When 5:15 rolled around, boarding was not completed…. things began to look bleak and getting home that night was not looking good.

As I boarded, I asked the flight attendant if announcements would be made regarding connecting flights.  Her answer “Absolutely! I will be obtaining additional information once we are within an hour of arrival.”  Oh good, so I thought.

The lack of service from the crew during the flight was incredible.  Yes, it was a full flight, but I’m sure that was no surprise to United airlines.  So why then did I have to struggle to get something to drink or to buy the smallest most expensive salad or to get a fork to eat said salad?  Did I mention that it was 5 hour flight?

That’s right, during the 4.5 hours spent in the air, the flight attendants managed to spend more time bickering with each other than taking care of the  passengers.  They were disorganized and more preoccupied with whatever was going on between them than in doing their job.

I asked our flight attendant about the connecting flights and was told “I don’t know anything about that”.  REALLY?

So we finally land and it’s 9:15 local time.  My flight is scheduled to depart at 9:25…. could I make it? What gate am I going to?  Nothing from the crew.  Finally, as everyone is already retrieving  luggage from the overhead compartments

“Hello everyone.  If Houston is your final destination or you have a while before your connecting flight, please try to remain seated so that your fellow passengers can try to make their connection.”

We sprinted from gate 39 to gate 22 and arrived at 9:30…. the plane had already pulled away from the terminal…. just then I get a text update from United….my flight to San Diego will be arriving 10 minutes early…
Isn’t that great? – TOO BAD I’M NOT ON THAT FLIGHT!!!!!!

That was followed by another text letting me know that I had been rescheduled for a 9:01 AM flight the next day.

We got in line at the customer service desk along with other passengers from our flight who were headed to a variety of locations.  We were quickly joined by passengers from other flights, I would estimate 4-5 flights, who had also missed their connections.

The line was long and slow moving and I could not help but wonder how many other passengers were dealing with the same situation on the other side of the airport.

At about 10 PM it was finally our turn to speak to someone.  We were handed our new boarding passes along with $7 meal vouchers.  We were told that if we wanted them to arrange (and pay) for a hotel room, we would need to wait a few more minutes.  We politely agreed to do so since our representative was a lot less short and snippy than some of the others dealing with other passengers.  We stayed close by to make sure she didn’t forget about us.

At 10:30 I noticed that passengers that had been in line behind us were being given their hotel vouchers so I approached the desk.  I did so just in time to hear

Passenger: $7, really? You get me stranded in a city I don’t want to be in, try to book me on coach when I paid for first class and now you give me $7 to feed myself?

United Customer service rep:  Well, it’s something, better than nothing

OMG!  WTF and every other acronym I can think of.  That’s when  it came to me, the thought that would become the title for this blog…..United Airlines is perfect at terrible customer service

At 11PM we finally given our hotel voucher and taxi voucher.  We would be staying 20 minutes away from the airport at a Best Western.  As long as it’s clean and I can get something to eat (all of the food vendors had closed long before we landed) then that’s fine with  me.

We passed many hotels, restaurants, bars, grocery stores and drive thoughts on our way to the one hotel that had nothing around it for blocks.  And I do mean nothing.  It was in the middle of a freeway construction zone.

The next morning we get to our flight planning to use our meal voucher to purchase breakfast…. guess what?

UNITED AIRLINES DOES NOT ACCEPT THEIR OWN MEAL VOUCHERS FOR MEALS ON THE FLIGHT!!!!! Once again, OMG, WTF!!!!

The flight into San Diego arrived 40 minutes late…. there was no announcement or acknowledgement from the pilot or flight attendants.  I take it back, one of the flight attendants did say, as we were getting ready to exit….don’t forget to check the monitors for your connecting flights.

I wished all of those passengers good luck in their travels and swore never again to expose myself to United Airlines’s terrible customer service.