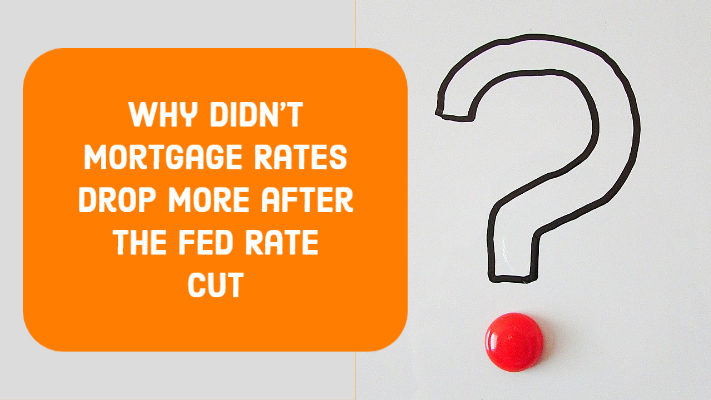 it’s not the most exciting topic for most people.

Let’s start off by explaining the Fed rate.

The fed rate is the rate that banks charge each other overnight to cover Federal Reserve requirements. It’s basically a one day loan among banks. This rate is used as a benchmark for many types of loans, but it is not a direct reflection of how mortgage rates will move. At least not for primary mortgages.

What type of rates are affected by a fed rate cut?

Movement in the Fed rate affects all rates to a certain extent, with credit cards and other variable rate loans feeling it the most. Why? Because the fed rate has a very strong impact on the Prime Rate . Typically, the Prime Rate and the Fed Rate have a 3% spread from each other. Note on the chart below that every time there has been a Fed rate cut or increase, the Prime Rate has moved as well.

So what are mortgage rates based on?

Mortgage rates, for the most part, are based on the bond market where mortgage back securities (MBS) are traded.
Mortgages with similar characteristics are bundled together and sold as securities. As more investor move their money into the bond market, like when the stock market is dropping drastically, the yield of each bond lowers and in theory, this is good for mortgage rates. Take a look at how the 30 year fixed rate mortgage moved in comparison to the 30 year treasury bond.

So why did I say “for the most part” when talking about how the bond market affects rates? Because when it comes down to it, the rates offered are up to the lenders. There are times, like during the refi booms, where lenders are at capacity and they purposely slow down the intake of applications by increasing rates and making it less attractive for clients to move forward. Sound crazy but lenders have to be able to deliver on the rate promised and being overwhelmed means not closing on time which can be costly for them. This is more common among smaller mortgage lenders who do not want loans sitting in their pipeline for months at a time. Conversely, big bank like Wells Fargo and Bank of America lock refinances for 150+ days because their backlog makes them notoriously slow.

Do mortgage rates care about a fed rate cut?

Yes, mortgage rates care about a fed rate cut but mortgage rates care more about the fed policy of purchasing MBS than the movement of the fed rate. For many years, the Fed kept interest rates artificially low by buying billions of dollars in MBS. The purchasing really ramped up in late 2010, leveled off in 2012 and ramped up again in early 2013. The levels remained constant until late 2017 when they started to ease off.

As you can see from the chart below, the 30 year treasury yield dropped as the Fed bought more MBS. However, it is worth noting that the effects is not a mirror image of one to the other.

The bond market is a living thing that moves constantly. There might be a fed rate cut a few times a year but there are constant changes to bond prices throughout the day.

The bond market dynamically moves with changing economic climates. Both those unforeseen and those planned.

Mortgage rates had big movements in 2011-2012 due to the European credit crisis. They saw a big spike from in 2013 when the fed announced that they were reducing the amount of MBS they were purchasing.

There were 7 Fed rate increases between March 2017 and December 2018. The mortgage bond market had already adjusted for the changes and positioned itself for those increases and so the mortgage rates actually dropped despite the move to the fed rate.

2018/2019 rates were at one of the highest levels since 2013. The bond market predicted that Fed rate cuts were in the horizon and so rates began to come down. The drop in the rates continued through 2019 despite the fact that the fed rate was flat for the first 8 months of that year.

And your the point is what?

My point is that you should not become so excited when you hear that there was a Fed Rate cut. You also should not be so disappointed when your loan officer doesn’t offer you a zero rate when the Fed rate is at 0%-.25%. Understand the differences between the two. Make informed decisions.

So, there you have it. A quick look at If you have any questions on this topic or any other mortgage-related topic, by all means reach out to me. Send me an email Give me a call – (858) 3-LOANS-3 Text LOANINFO to 44222 Connect with me on Social Media. Please hit the like button if you enjoyed the Article. Share it with your friends. And of course, don’t forget to subscribe.